Jun 25 2015, We THE People on Michigan chose to live in Peace and we chose this as our national flag of Peacetime!

We the People of the United States,
actually have two national flags, a military flag and a civil flag for peacetime.
They have several important distinctions and meanings.

Almost all Americans think of the Stars and Stripes “Old Glory” as their only flag.

And IT IS BEAUTIFUL!!

The Stars and Stripes originated as a result of a resolution adopted by the Marine Committee of the Second Continental Congress at Philadelphia on June 14, 1777, for use on military installations, on ships, and in battle, directing that a U.S. flag consist of 13 stripes, alternating red and white; that a union be 13 stars, white in a blue field, representing a new Constellation.

Prior to, during the War for Independence, and after under the Articles of Confederation, smuggling was seen as a patriotic duty of the citizens of the thirteen independent and sovereign states, but after the ratification of the Constitution and the establishment of a new nation, smuggling needed to be stopped. The new nation depended on the revenue from customs tariffs, duties and taxes on imported goods in order to survive.

In 1790, with the customs laws firmly in place, Secretary of the Treasury Alexander Hamilton set to work devising adequate means of enforcing the year-old regulations. “A few armed vessels, judiciously stationed at the entrances of our ports,” Hamilton suggested, “might at a small expense be made useful sentinels of our laws.” Congress concurred, and that year appropriated $10,000 to build and maintain a fleet of ten revenus cutters, which were to be placed under the charge of the customs collectors, whose responsibilities would be enforcement of the tariff laws. Along with financial responsibility, Hamilton demanded that the officers be servants of the people. “They [the officers] will always keep in mind that their Countrymen are Freemen and as such are impatient of everything that bears that least mark of a domineering Spirit.”

Nine years later, Congress refined the revenue cutters’ role in customs operations with the passage of the Act of March 2, 1799, known as the Customs Administration Act. In particular, Congress determined “the cutters and boats employed in the service of the revenue shall be distinguished from other vessels by “an ensign and pendant, with such marks thereon as shall be prescribed and directed by the President of the United States.” Additionally, the Act permitted commanders of revenue vessels to fire at other vessels failing to respond “after such pendant and ensign shall be hoisted and a gun fired by such revenue cutter as a signal.” By this act the Revenue Marine (later called the Revenue Cutter Service) ensign served as the seagoing equivalent of a policeman’s badge, the distinctive sign of the vessel’s law enforcement authority.

The job of designing the distinguishing ensign eventually fell upon Oliver Wolcott, who had replaced Alexander Hamilton as Secretary of the Treasury in 1795. On June 1, 1799, Wolcott submitted his design to President John Adams for approval. Wolcott’s proposal featured an ensign of sixteen stripes, alternating red and white, representing the number of states that had joined the Union by 1799, with the Union to be the Arms of the United States in dark blue on a white field. It is significant that Wolcott turned the arrangement of the stripes ninety degrees to vertical to differentiate the new revenue cutter ensign from the U.S. Flag, to denote civilian authority under the Treasury Department, rather than military authority under the War Department.

Through usage and custom, horizontal stripes had become adopted for use over military posts, and vertical stripes adopted for use over civilian establishments. The Civil Flag, intended for peacetime usage in custom house civilian settings, had vertical stripes with blue stars on a white field. By the Law of the Flag, this design denoted civil jurisdiction under the Constitution and common law as opposed to military jurisdiction under admiralty/military law.

Although intended just for Customs house usage, the new Civil Flag became adopted by both customhouses and merchants, and others who could afford them, to show their civilian nature and not under military control. The practice of using the Customs Flag as a Civil Flag became encoded in law in 1874 when Treasury Secretary William. A. Richardson required all customhouses to display the Civil Flag.

On May 26, 1913, with the approval of Senate Bill S. 2337, (shortly after the fraudulent declaration by Secretary of State Philander Knox, that the 16th Amendment had been ratified, and during the same weeks that the Federal Reserve system and the IRS were established) the U.S. Coast Guard absorbed the Revenue Cutter and the Life Saving – Lighthouse Services, becoming a part of the military forces of the United States, operating under the Treasury Department in time of peace and as a part of the Navy, subject to the orders of the Secretary of the Navy, in time of war.

The Civil Flag used by the cutter service was modified, placing the Coast Guard insignia on the stripes in the field, and was adopted under Coast Guard authority, losing its original significance of civilian authority, which by then had long been forgotten. As the Federal government acquired more control over the States and their citizens during and after World War II, by 1951 the original Civil Flag had been phased out completely, its existence left as an artifact of time in a few old photographs and a rare mention in old books.

Today, the last vestige of the Civil Flag, the U.S. Coast Guard flag, being under the civil jurisdiction of the Department of Treasury during peacetime, is identical to the revenue cutter ensign, but with the service insignia emblazoned on the stripes in the field.

It is still seen as the shoulder patch of U.S. Customs employees but it too now has the gold fringe signifying Admiralty/Military/Law Merchant jurisdiction.

Nathaniel Hawthorne’s The Scarlet Letter, published in 1850 before the War Between The States has this description of the U.S. Civil Flag in the introduction, “The Custom House” —

“. . . Here, with a view from its front windows adown this not very enlivening prospect, and thence across the harbour, stands a spacious edifice of brick. From the loftiest point of its roof, during precisely three and a half hours of each forenoon, floats or droops, in breeze or calm, the banner of the republic; but with the thirteen stripes turned vertically, instead of horizontally, and thus indicating that a civil, and not a military, post of Uncle Sam’s government is here established. Its front is ornamented with a portico of half-a-dozen wooden pillars, supporting a balcony, beneath which a flight of wide granite steps descends towards the street Over the entrance hovers an enormous specimen of the American eagle, with outspread wings, a shield before her breast, and, if I recollect aright, a bunch of intermingled thunder- bolts and barbed arrows in each claw. With the customary infirmity of temper that characterizes this unhappy fowl, she appears by the fierceness of her beak and eye, and the general truculence of her attitude, to threaten mischief to the inoffensive community; and especially to warn all citizens careful of their safety against intruding on the premises which she overshadows with her wings. Nevertheless, vexingly as she looks, many people are seeking at this very moment to shelter themselves under the wing of the federal eagle; imagining, I presume, that her bosom has all the softness and snugness of an eiderdown pillow. But she has no great tenderness even in her best of moods, and, sooner or later — oftener soon than late — is apt to fling off her nestlings with a scratch of her claw, a dab of her beak, or a rankling wound from her barbed arrows.”

Before 1940, no U.S. flag, civil or military, flew within the forty-eight states except in federal settings and installations. Only state flags did. Since the 1935 institution of Social Security and the Buck Act of 1940, 4 U.S.C.S. Ch 4 Sec. 104 - 113, by clever legal maneuvers the feds have entirely circumvented the U.S. Constitution, and have overlaid federal territorial jurisdiction on the sovereign States, bringing them under the admiralty/military jurisdiction of Law Merchant, the Uniform Commercial Code (UCC), the law of Creditors and Debtors.

Since then the U.S. military flag appears beside, or in place of, the state flags in nearly all locations within the states. All of the state courts and even the municipal ones now openly display it. In the last half century they have more openly declared the military/admiralty law jurisdiction with the addition of the gold fringe to the flag, the military flag of the Commander-in-Chief of the Armed Forces.

Such has been the path that has brought us under the Law of the Military Flag. This should have raised serious questions from many citizens long ago, but we’ve been educated to listen and believe what we are told, not to ask questions, or think for ourselves and search for the truth. 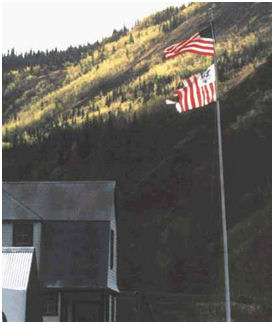 US Civil Flag at the Eagle, Alaska custom-house,
on the Yukon River at the Canadian border, circa 1997
Photograph by Walter Kenaston