Alaska a Free and Independent Nation=State

Are you happy with your government?

Are you happy with the acting Public Office Holders=Employees?

There exist out there many groups who harken back to the grand jury and the Constitution for the united States of America. Some are educational, some are instructional, some are political.

Only one is political in the most fundamental, organic sense in embracing the power of We The People in assembly and the original united States Constitution of 1789 and mankind's Bill of Rights of 1791.

The corporate State of Alaska was granted statehood by the Corporate UNITED STATES INC. on January 3, 1959 after land usage rights being purchased from the Russian Empire in 1867. After the UNITED STATES INC. purchased Alaska from Russia, it was set aside and was considered as a military district. Most of the military activities and military training took place in Alaska. The status of Alaska was upgraded in 1884 from a military district to a judicial district. Clerks, judges, marshals, and other officials were appointed by the federal governmental services corporation to help run and manage the Alaskan territory. The reason Alaska has no counties is because the land owners was unknown therefore Alaska had to use boroughs.

Now here we are in 2019 and Alaska remains a corporation and a fiction. We The People on this land known as Alaskan settlors have yet to claim the land and declare to the world that Alaska is a settled de jure nation=state. A minimum of 30 Alaskan settlors are required to assemble and draft the Alaska Declaration of Settlement of a nation=state. These 30+ settlors in assembly must draft a state Covenant similar to the lower 48 state Constitutions. These 30+ settlors must hold an election to fill the de jure seats required for self governance. A drawing must be held for 25 grand jury members and 2 alternates for the state level grand jury. A record must be maintained as a continuous unbroken chain from the first gathering in assembly through all future meeting sessions. Notice must be given far and wide. Instructions to de facto corporation actors/employees to be given after notice rebuttal time expires.

Send email to This email address is being protected from spambots. You need JavaScript enabled to view it. for inquiries or for Alaskans to get involved. 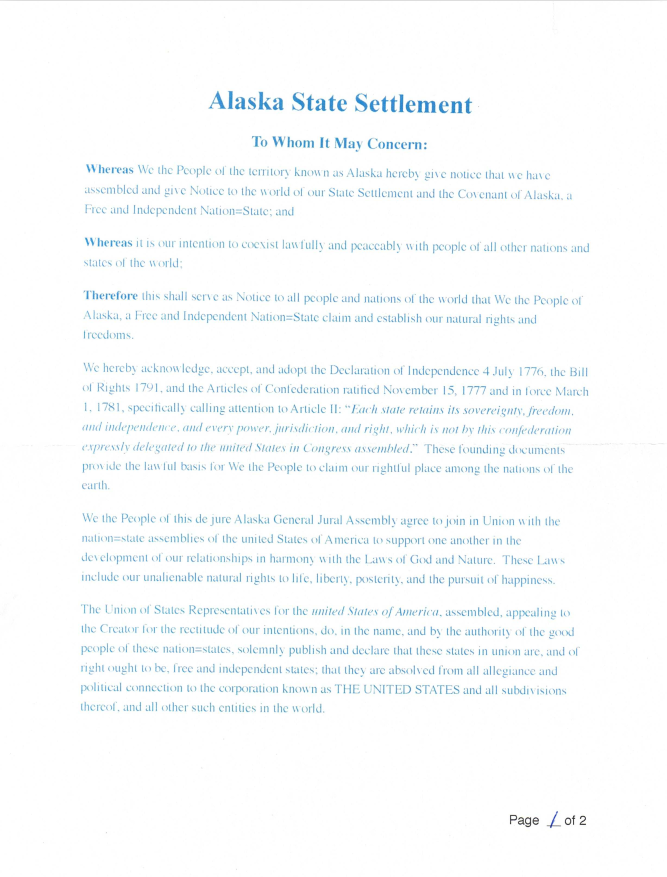 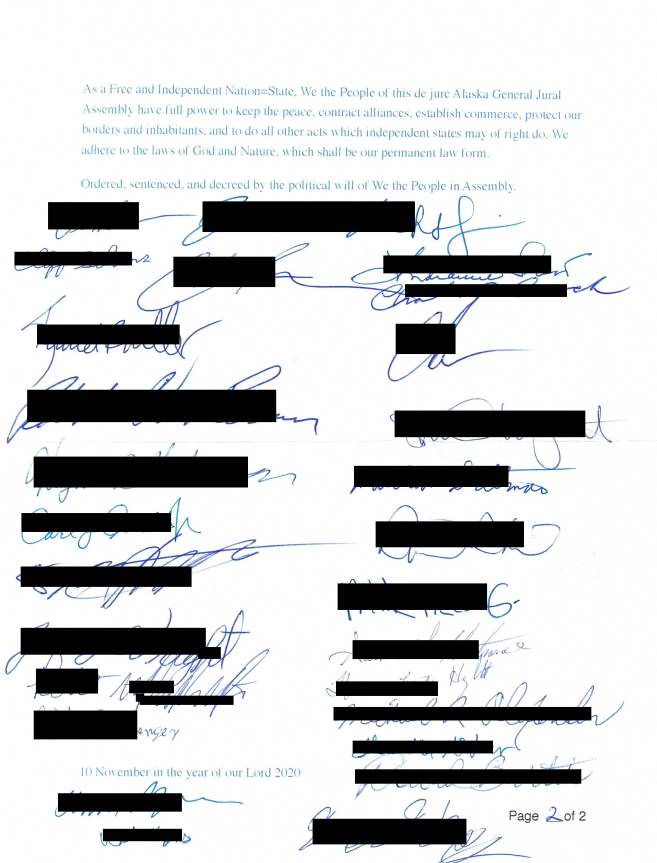 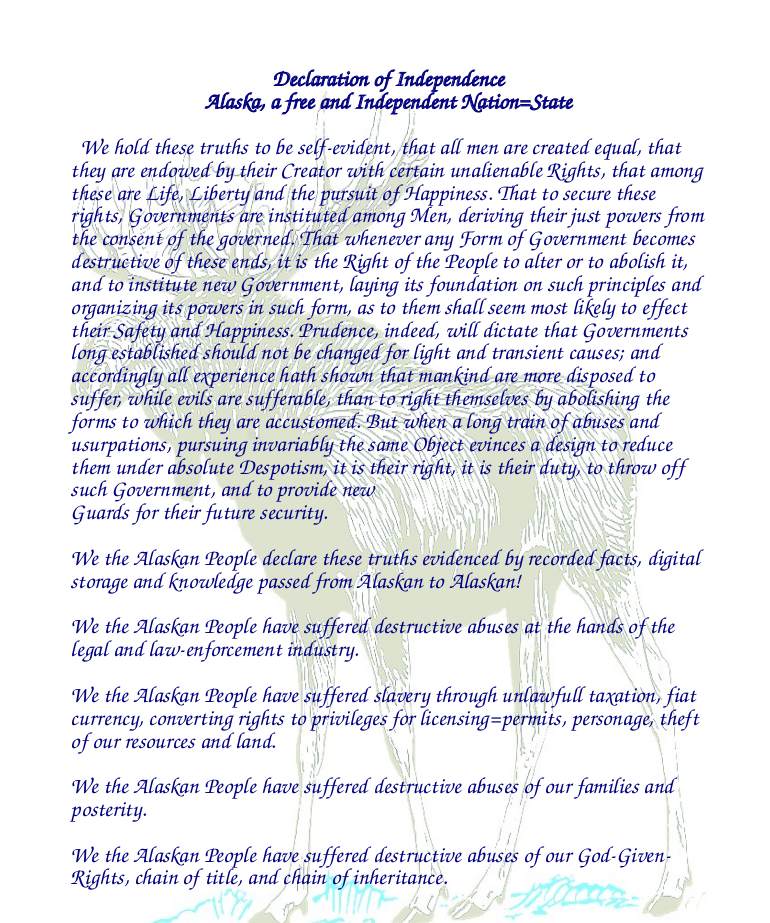 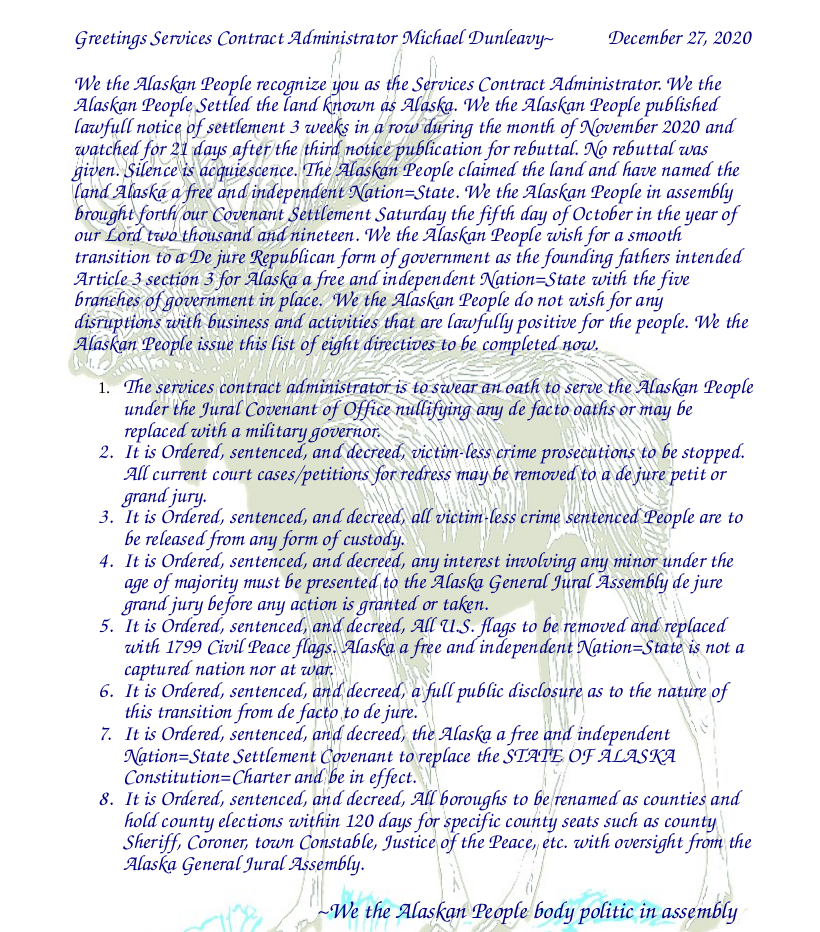 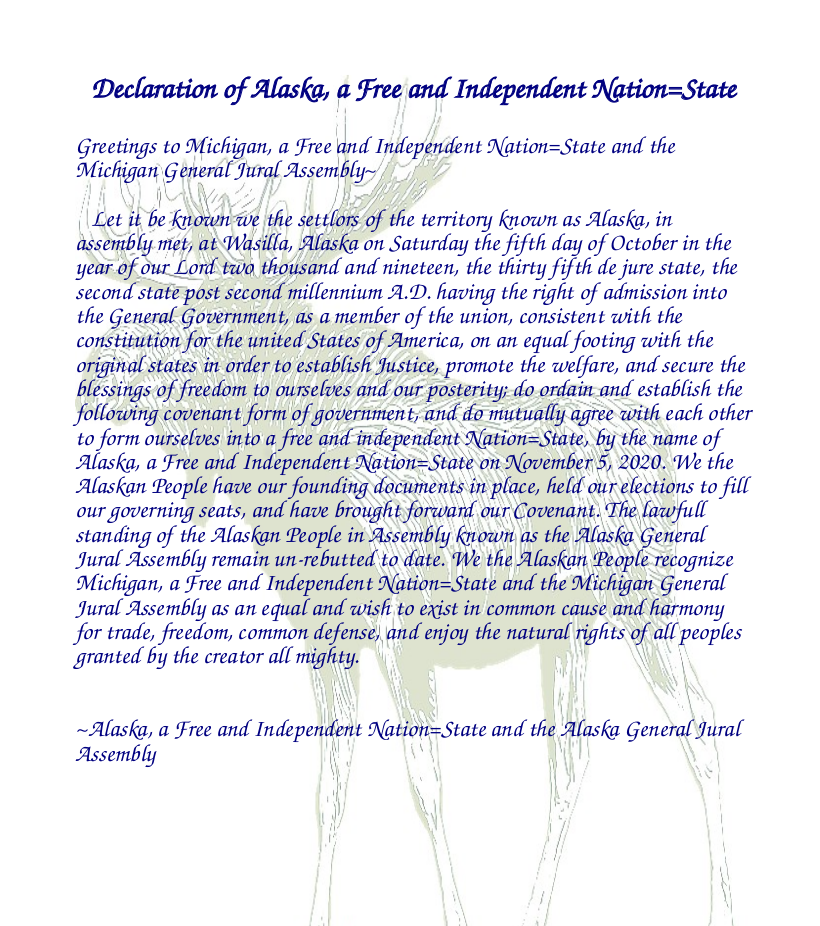 a Free and Independent Nation=State

Brought forth in convention, begun at the village of Wasilla, Alaska, on the fifth day of October, two thousand and nineteen, A.D., this Covenant for a free and independent Nation=State creates a perpetual trust which shall administer public holdings through duty-bound and bonded officers.

We the settlors of the territory known as Alaska, in assembly met, at Wasilla, Alaska on Saturday the fifth day of October in the year of our Lord two thousand and nineteen, the thirty fifth de jure state, the second state post second millennium A.D. having the right of admission into the General Government, as a member of the Union, consistent with the original foundational documents including the Constitution for the united States of America, on an equal footing with the original states in order to establish Justice, promote the welfare, and secure the blessings of freedom to ourselves and our posterity; do ordain and establish the following Covenant-form of Government, and do mutually agree with each other to form ourselves into a free and independent Nation=State, by the name of Alaska, a Free and Independent Nation=State.

All powers possessed by man flow from the Almighty, to create or to destroy. In this, all men are equal, to exercise such powers individually, or through delegation to surrogates, to protect and enjoy life, freedom, liberty, and the pursuit of happiness. It is for that purpose that men institute forms of political covenant, to express the bounds of surrogate power which may be employed, and to construct a framework to secure both non-particular and particular rights. This covenant is written for those purposes, and more, to instruct a people held in bondage how the mechanisms and devices which have enslaved them operate.

Truth is the author of freedom, so also, without truth, freedom is impossible. To facilitate the acquisition of truth, scripture is given us, and to all people, to instruct us in conduct which might either eventuate in bondage or freedom. And scripture of all stripes is founded upon revelation of the Almighty expressed through common law. In the furtherance of individual liberty in law, common law forbids the bearing of false

As such, no political state should enforce any contract, or impose any penalty, arising out of a claim which is based upon a witness to these abominations, penalty for infamy up to indenture for life, excepted.

We, therefore, acknowledge that freedom can be exercised only through the seeking of truth, the intent to live in harmony, and the free expression of life through the enjoyment of both private and public property.

Men and women assemble in common accord to extend their powers by delegation of authority. In so doing, each is not diminished, nor does each surrender any powers to a position of fealty, whether to a living being or to a fictional entity. Man and woman each remain sovereign, and the trust structure created by covenant, along with its titles of possession, which are held by fiduciaries under bond, are in a position of vassalage and fealty to the people.

We recognize two forms of law: common law, and its antithesis, civil law. We reserve to ourselves common law, the form of law offering freedom, as we express our claim to particular rights, and reserve all other rights unexpressed. We also authorize the creation of a bailment specifying certain duties ascribed to fiduciaries in a position of fealty to the people under civil law, who shall administer certain public accounts.

No ruler has ever been the source of a nation’s wealth. Thus, all rulers, by the principles of equity, are fiduciaries of a constructive trust in which the property held by such ruler, or ruling entity, belongs to the people, and not to the ruler, nor to his, her or its oligarchy.

When it is apparent to the people that their fiduciaries have acted outside their position of trust, regardless of compact, or constitutional expression, it is incumbent upon the people to change their form of governance, strip the trustees of their charges, offices, and property, and punish them for both their belligerence and their crimes. This covenant is offered to set right that which was twisted by attorney agents of a foreign power who have acted to impose a form of law which is alien to this land and to a free people.

It is beyond absurd to suppose that the founders of the Constitution for these united States, and by extension, the Constitution of Alaska, intended to bring with them the same form of despotism from which they suffered in Europe, and from which they ventured to seek a new land; and even if they did, it would have worked an intentional fraud upon the inhabitants of this land, who sought freedom rather than vassalage, and would never have given their assent had they known what form of government was actually offered to them, and the inevitable condition of absolute servitude it would eventually produce. We, armed with knowledge, will not make that same mistake.

Let us now correct those mistakes. If there be any thing in this document which does not accomplish freedom for the people, let it be amended by the jurists, and let all the people be jurists if they desire. But, in no wise shall any amendment work to diminish the rights of the people, nor subject them to peonage.

We the people of Alaska, a Free and Independent Nation=State, grateful to the Almighty for the organic law and the blessings of liberty, do ordain and establish this Covenant to secure the blessings of liberty to ourselves and our posterity; to provide for the operation of law; to secure the absolute right of private property; to administer public property for the equal benefit of all; to bind public servants to certain fiduciary duties; to render punishment for breaches of duty; and to organize and establish public courts.

Section 1. The geographic bounds within which public ministers have a duty to administer public property and to operate law under this Covenant shall be described by metes and bounds, and through the use of Global Position Satellite by longitude and latitude, as soon as is practicable, which shall be recorded in the Journal of the House of Statesmen.

Commencing from the southern-most point of the island called Prince of Wales Island, which point lies in the parallel of 54 degrees 40 minutes north latitude, and between the 131st and the 133rd degree of west longitude (meridian of Greenwich) said line shall ascend to the north along the channel called Portland channel, as far as the point of the continent where it strikes the 56th degree of north latitude; from this last mentioned point, the line of demarcation shall follow the summit of the mountains situated parallel to the coast as far as the point of intersection of the 141st degree of west longitude and finally from the said point of intersection, sai d meridian line of the 141st degree, in its prolongation as far as the frozen ocean, and from the center of the Earth to the farthest reaches of the galaxy.

With reference to the line of demarcation laid down in the preceding article, it is understood that the island known as Prince of Wales Island belongs wholly to Alaska, a Free and Independent Nation=State.

The remainder of the Covenant will be posted at a later time.